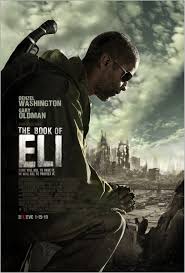 Call me johnny-come-lately but I’ve been thinking about the film “The Book of Eli” and need to vent. I have nothing but admiration for Brother Denzel since “Man on Fire”, and being a fan of most things gritty and post-apocalyptic, I made sure to watch it. I’ve seen it several times and now own it on DVD.

A quick survey of online review sites reveals most critics give it a “Meh…” 50% rating, while fans are slightly kinder with an average 50% to 65% in favor of said film. I also noted on Metacritic the ratings plummeted closer to the east coast.

It’s got some obvious flaws. I mean where does Denzel get his endless supply of moist towelettes? Where does Ms. Kunis hide her stash of designer clothes, or find time to get her eyebrows waxed? And [insert SPOILER ALERT here] why is there only ONE copy of the Bible left in post-Flash America?

To be fair, Thunderdome has flaws too.

Seems to me most of the criticism – nay, vitriol – stems from the ‘fundamentalist’ extremes: Christian or Atheist. Christians don’t like it because the post-apocalyptic wasteland is filled with criminals who use bad words when they plunder and pillage, while Atheists raise a cry and hue against the film being didactic, proselytizing, and burdened by overt religious-ity. I mean, he’s got a copy of THE HOLY BIBLE… and they show it on screen. Like a full frontal shot… It’s Christian propaganda right up there with Narnia! *mutter, mutter*

Where the hell do these people live, anyway?

The world we’re on is filled with wars, corruption, sex-trafficking, child prostitution, extortion, rape, slavery, abuse, and so on, ad nauseum. It’s also filled with people who hold definite religious convictions, who are doing their best to feed the poor, tend the sick, build schools and hospitals, alleviate suffering, and live decent honorable lives. One of my friends is currently in remote South Africa overseeing a medical mission and building homes for at-risk aids orphans. There are an estimated two billion plus Christians on the planet right now and it’s been a transforming, guiding force for individuals and societies for thousands of years.

This is fiction. This is another movie in a long line of movies. Feel free to dislike the film, but be honest about it. Drop the pretense of piety and intellect. Both of these groups need to take a field trip out of their gated communities and recognize God and Sin have been around… well, forever. And they aren’t going anywhere.

And they’d certainly both be around should Mankind survive a global holocaust.