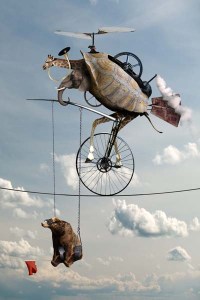 It was Andy Rooney who tweaked Samuel Johnson’s statement and said Religion (not Patriotism) was the last refuge of scoundrels. I’ve met my share of scoundrels, in and out of church, but don’t let anyone convince you Christian faith is the coward’s way out.

If an unexamined life isn’t worth living, an unexamined faith isn’t worth having. I am truly blessed as a Christian and person, but almost nothing in this journey has turned out as expected. It’s all been stretched and challenged. The struggle to live in authentic relationship with God, to honor and retain what Jesus did in my heart 29 years ago is constant and very real.

Of all these challenges, finding myself in a respectable Baptist church after decades in a controversial, militant, evangelical Pentecostal organization is presently the most difficult, namely because of vastly different approaches to salvation and saving faith. While one can turn the ‘narrow road’ into a precarious tightrope by legalistic regulation and spiritual-sounding addendums, thus undermining the completed work of Christ’s death/resurrection, the other seemingly reduces believers – flawed, precious, noble, fallen, confused human beings – into near inanimate objects arbitrarily selected by arcane process, divorced from response or responsibility. For those in the theological-know, I’m touching the classic Calvinism vs Arminianism debate here.

Richard M Weaver noted ideas have consequences, and it has been said Calvin wouldn’t be a Calvinist today, what with the way his teachings are interpreted. But therein lies the problem: interpretations and their consequences. Now I’m certainly not going to solve the Calvin/Arminian debate with my little blog post, but I’ll exorcise it and hope for some clarity at arm’s length. Maybe dispense with a couple of the more ridiculous caricatures foisted on the general public too.

1And you were dead in your trespasses and sins, 2in which you formerly walked according to the course of this world, according to the prince of the power of the air, of the spirit that is now working in the sons of disobedience. 3Among them we too all formerly lived in the lusts of our flesh, indulging the desires of the flesh and of the mind, and were by nature children of wrath, even as the rest. 4But God, being rich in mercy, because of His great love with which He loved us, 5even when we were dead in our transgressions, made us alive together with Christ (by grace you have been saved), 6and raised us up with Him, and seated us with Him in the heavenly places in Christ Jesus, 7so that in the ages to come He might show the surpassing riches of His grace in kindness toward us in Christ Jesus. 8For by grace you have been saved through faith; and that not of yourselves, it is the gift of God; 9not as a result of works, so that no one may boast. 10For we are His workmanship, created in Christ Jesus for good works, which God prepared beforehand so that we would walk in them.
Paul’s letter to the Ephesians. Ch 2. Vs 1-10

FAITH AND TRUST
In my understanding, salvation comes down to faith and trust: what is real faith, and what do I trust in to address the sin in my soul?

We can all admit ‘faith’ is more than acknowledging the concept, conceding the possibility or fact of the matter. The real article digs deeper – it hinges on personal acceptance. We exercise ‘faith’ all the time: eating in a restaurant, getting on an airplane, shuffling out on an ice-covered lake… Our actions reveal our beliefs, and I submit genuine faith is an inner conviction that prompts an outward action. If I really believe, I act on it.

A GIFT
God offers the gift of eternal life and complete forgiveness in Jesus Christ. God loves you even as a sinner. He deals, reveals, convicts, but you don’t have to accept it. God will not violate your will.

If you do however, if you believe the Gospel, grasp who Jesus is and what he did, then it will radically transform you. Genuine faith changes the way you look at everything: life, death, people, money, sex, position, possessions, yourself… all of it. Not that we suddenly act perfect, selfless and eternal, but the core of our being shifts from small, self, temporary toward God, others, compassion. We start to concentrate on the important over the urgent. That is the essence of true religious conversion. I’m not saved by works/prayer/bible reading/faithfulness/sacrifice/evangelism/doctrinal confession… rather these flow from the forgiveness, redemption and relationship I have with God in Jesus Christ. They stem from my faith – a ‘root to fruit’ thing.

Contrary to a lot of religious spittle and rant, Hell is not the exclusive destination of homos, illegal immigrants and liberal democrats; we must all give account to our creator for our souls. As I understand it, God would much rather be our Savior than Judge – quite literally dying to know us. Knowing this, and that God sees all: the good and the bad, the wounds, the attempts, the dreams and fears – along with my sin and selfishness, the question becomes what do I trust in to be the remedy for my sin on that day? Do I deny it? Rationalize/justify? Demand God grade on a curve? Try to pay it off with good deeds, good intentions, religious ritual and observations? The enormity of moral choice, the gravity of sin, the perfection of God means all that falls short. Way. Short.

The offer of redemption in Jesus is free, complete and eternally secure. Its strength is based on who He was and what He accomplished in His incarnation, death and resurrection. You can’t get ‘more saved’. You also can’t ‘lose’ salvation as in ‘holy crap, it was here a second ago and now I can’t find it’

But you can give it back or pawn it for something else. It’s still your choice.

In the same way a heart decides to trust in Jesus as sin’s remedy, it can come to trust in something else. We are and remain free moral agents – Salvation and Conversion don’t change that. The language and dynamic of free will – calls to choose, invitations, the weight of decisions, accountability, the challenge to continue, to put some things off and others on, etc, etc, is throughout the Old and New Testament. This is nothing to do with ‘works’ or ‘earning your salvation’. You can simply repent of repenting. What starts as reliance on love and grace becomes trust in membership, spiritual disciplines and observances, ministerial success… the evangelical status quo as proof of ‘righteousness’ instead of Jesus. You can pull a Benedict Arnold return to old allegiances. That’s what Paul’s letter to the Galations is all about – indeed, that’s one of his main struggles throughout the New Testament.

Jesus is not a ‘get out of jail free card’ you play on the last day. Salvation is not a flu shot – one time and you’re all set. Grace may be free but it’s not cheap or greasy. Even a cursory reading of the Gospels show following Jesus required serious commitment. He made that quite clear.

The night before the Exodus, the Hebrews put the blood of a lamb on their doors, a sign for the angel of death to pass over them. I submit a Hebrew firstborn out on the street would have been chalked at dawn, while an Egyptian’s eldest son who sought refuge in a blood-marked Jewish home would have been safe. It’s the blood that saves. And any of us scoundrels can take refuge under it.

The struggle is to stay there.