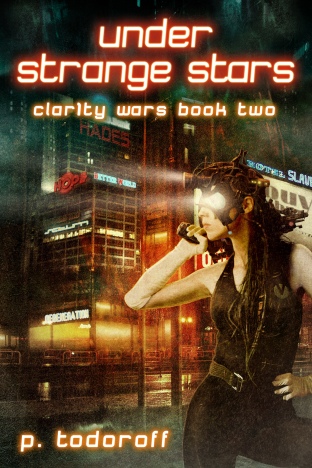 The next installment of The Clar1ty Wars is now available at Amazon for Kindle and other flavors of e reader.

UNDER STRANGE STARS picks up where One Bad Apple left off: Seeb in hiding, detectives Lynch and Sarin chasing a trail of bodies that is only growing longer, a series of vicious terrorist attacks suddenly leaves Drop City reeling.

Both the Corporations and the Du-li independence movement maneuver in the shadows, forging deadly alliances in the fight not merely for supremacy, but the future of the entire Kepler22 system.

Pick up your copy now.

5 Replies to “Under Strange Stars – out the door.”