First in a series of Guest Posts for 2016. First up, the founder of the Crossover Alliance, a small press specializing in gritty Christian fiction.  I asked him to address the viability of faith-based fiction and its ability to impact secular, non/other-believing  readers. Here are his thoughts. 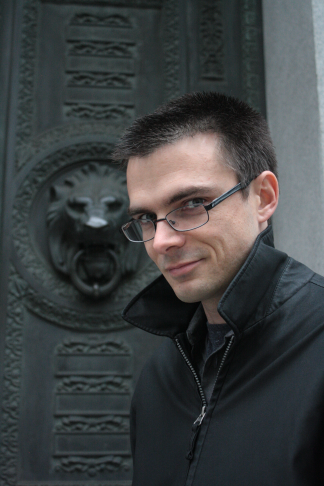 It was only a few years ago that I decided to write a short story for NaNoWriMo entitled Black Earth. It was supposed to take a look at the universe of my Expired Reality series long before humans colonized another planet in the universe, back when the Earth was busy being destroyed by a vile alien force. Little did I know at the time that I was penning the basis for a four-book series that would determine the course of my writing – and even my career.

When I wrote the first book of the series, I realized the thing that made it unique was that it was science fiction, it was Christian fiction, and it was filled with real-world content. The first chapter contains a rape scene, and from there the book dives into areas that still are not acceptable in the fiction that the main Christian publishing houses put out. It was at that point that a new genre was born: edgy Christian speculative fiction. The birth of the genre eventually turned into the birth of the publishing company that I currently run: The Crossover Alliance. We specialize in this special type of fiction.

I would argue against that point. As much as I am a writer, I am also a reader. And I’ve read un-compelling fiction on both sides of the fence – Christian and non. I’ve read secular fiction that tried to stay sanitized and ‘safe’, and ended up being drab and unconvincing. I’ve read Christian fiction that tried to mask itself as fantasy, and ‘trick’ readers in the end by plugging Jesus Christ and salvation at the end of a very boring, very clique story.

When I wrote the first book in my Black Earth series, the rape scene found in my first chapter came naturally. My character, Cynthia Ruin, is considered the school whore because she bases her status on who she sleeps with. It isn’t until she is raped the night of her high school graduation that she begins questioning her actions. Her rape needed to happen, and the way I described it – from her point of view, drugged – couldn’t have had the same impact if I had just said that she was carried around a corner and then ended the chapter.

There’s a strange habit that Christian writers have adapted over the years where they believe their fiction has to be clean, pressed, and folded before it can be presented to the rest of the world. Or are they actually just trying to present it to other Christians? Maybe that’s the problem. Who are we writing for? Does that question really even matter? If we’re writing to Christians or non-Christians, don’t we all struggle with the same things? The only difference is that Christians have accepted salvation – well, supposed to have accepted salvation. So if it doesn’t matter to whom we are writing, does it matter why we are writing? If we’re trying to write to a dark world to show them the light of Jesus, wouldn’t it make sense to set the light of Jesus against a dark world within our stories?

This isn’t to say there isn’t an audience for straight up, Rated-G Christian fiction. But I don’t believe that type of Christian fiction is necessarily aimed at trying to show the light of Jesus to a dark world. I think those stories are meant to be sanitized fiction for a Christian-reading audience because the Christian-reading audience doesn’t want to read secular content. The problem with that is that we’re not reaching a non-Christian world. But that’s why the ‘why’ of what we write is important to figure out.

I think any good writer who involves themselves in this unique genre isn’t trying to be edgy just to be edgy. We’re trying to write authentic fiction that shows the world – the people in this world and the sins in this world – for what they truly are and how the light can both reveal the darkness and in the end chase it away. What is edgy anyway? Is it some foul language, some lewd scenes, some blood splatters? I think it’s simply content that pushes the real world into our writing, filling it with real issues: slavery, depression, mayhem, chaos, anger, promiscuity, lust. Good versus evil. Gray versus grey. There’s an undercurrent of tension that tugs at the reader’s heart and mind, that nudges and sometimes pushes them out of their comfort zone. It forces them to ask the hard question: Would you sacrifice ten for ten thousand? It forces the reader to face their own demons, the demons that live with them day to day. And then once the reader is brought to a place where they can no longer deny the darkness, the evil, then they are shown the light of the world, the salvation that is made available to everyone.

How do we know what is good unless we have seen or experienced what is evil? I think that’s what it boils down to. We shine the spotlight on the dark deeds to expose them for what they are. And that, my friends, is a scary way to write. It’s a scary way to read. But it’s the realest Christian fiction you will ever experience in your life.

Be sure to check out the latest Crossover Alliance Short Story Anthology. It’s out and available at Amazon. Check it out here.