For those who enjoy their post-apocalypse flavored with AK-47s, vodka and salo, my latest short story, ‘Strange Treasure’ is available at Amazon.

Written with my upcoming war game rules – ZONA ALFA – in mind, Strange Treasure follows Zone Guide, Yuri Bonyev as he leads Russian mobsters on a search for prime real estate inside the world’s largest and most mysterious quarantined area.

Kindle only for now, I’ll add it to a print collection once I’ve accumulated several more shorts. Thank you all for your support. It’s very much appreciated.

The adventures of Zone Guide, Yuri Bonyev, continue. In finishing and editing, it became apparent ‘Strange Treasure’ was a far more appropriate title. And with that came the need for a more relevant, engaging cover. So…

To finish what I started, I’ll post the final chapter at my hobby blog Stalker7.com this weekend. However, the full and polished story – “Strange Treasure. Another tale from the Exclusion Zone” – will be available at Amazon soon. Kindle only for the time being.

Thanks to everyone who read and commented. I sincerely hope you enjoyed it. Have an excellent day, comrades.

HARDWIRED – a table top war game set during the Corporate Wars of 2069 in the mega-city of New Kowloon. Miniatures agnostic. 1 – 6 Players, Co-op or Solo Mode. Made for 15mm – 28mm miniatures. Grab your friends, create a team of elite Agents, and select a mission. It’s time to put all those cool, random sci fi miniatures to work.

For those of you who don’t know, I’m a long-time table top war gamer. (4 + decades) HARDWIRED is a set of simple, war game rules that allows players to reenact the desperate missions and frantic firefights from their favorite cyberpunk books, games, graphic novels, and movies. Select a mission, create your team of Agents, and gear up for a run-n-gun.

Narrator Madison Niederhauser has agreed to read ‘The Stones Remember’. His work on ‘Hard Kill’ was pitch perfect and I’m fortunate to have him do another of my short stories. Should be done end of September and I’m looking forward to it.

In case you were wondering, here’s HARD KILL at Audible. The eBook at Amazon.

Thanks. Have a great day.

If you’re new to audio books, click on the titles below for more information and to sign up for a free trial at Audible.  Or simply log in to your Amazon or iTunes account and give them a look. Four quick listens. Well written, -if I do say so myself  – excellently narrated, and all at a good price.

The Celtic-flavored ghost story ‘The Barrow Lover’ about two small time treasure hunters who dig up more than they bargained for.  Narrator Daniel Purcell went above and beyond telling Declan and Paddy’s story.

‘Hard Kill’, the ’15-minutes in the future’ action piece about a spec-ops team racing to stop an attack in the American Heartland. Solid narration by Madison Neiderhauser.

And ‘A Prayer to Saint Strelok’ – inspired by the Russian Sci Fi film ‘STALKER’ by Tarkovsky and the Ukrainian horror-survival video games of the same name.  Charles Cromer captures the mystery and terror of the Exclusion Zone. 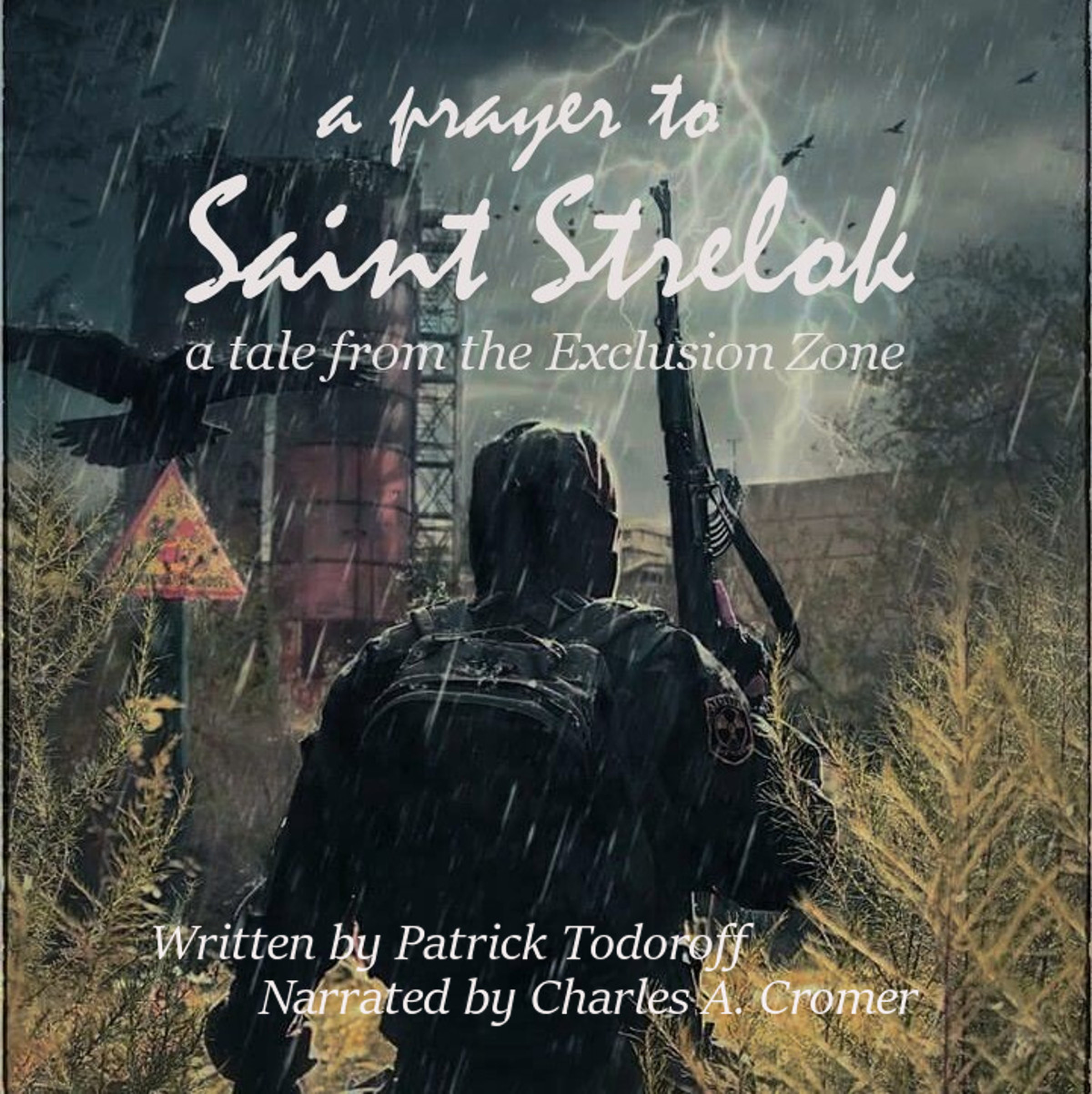 As always, I’d love to hear your thoughts on the stories and the narration. Or if you’re busy, leave a star rating. Every one helps.

Thank you again for your support and encouragement.

Take care and have an excellent day.

In the 22nd century, the ethnic Uyghur in Western China still dream of independence. Decades of discrimination, surveillance, and repressive policies by the Chinese government have only strengthened their resolve. Frustrated with the separatists , the Beijing enacts a final solution: the forcible deportation of all dissidents to Mèng Tiān, a desolate mining colony in the Kepler system, five hundred light years from Earth.

When the relocation program backfires and a full-scale insurgency erupts, the elite operators of Zombie Six arrive as part of the U.N.E. Peacekeeper force. Ordered to kill or capture the Uyghur leadership, the team finds itself in a deadly crossfire of corruption, deceit, and drone-borne IEDs. To survive, Zombie Six must first remember Truth is still the first casualty of war.

“Enemy of my Enemy” is a stand-alone novella from the author of the Eshu International novels, the ongoing Clar1ty Wars cyberpunk series, and other spec-fiction works.

Enemy of my Enemy –  A Zombie Six Mission is now available at Amazon, both in print and for Kindle.  I wanted to take a moment to let folks know and thank everyone for their support, both online and in the real world. That anyone takes the time to read my stuff still amazes me. So… a few words about how ‘Enemy of my Enemy’ came about:

There’s always that initial something that pushes a story into motion. A spark that gets the creative gears turning or a seed that takes root and grows. Enemy of my Enemy was born out of a hard kernel of news concerning the Chinese Government’s treatment of the ethnic Uyghur in their western provinces. It didn’t show up on my radar all at once, mind you. It was more jigsaw puzzle pieces, assembling over  a year or so to form a genuinely disturbing image of relentless, hi-tech coercion, forcible assimilation, and repressive policies.

My eldest son was the first to bring the situation to my attention, and to be honest, I filed it under a Communist administration’s usual rigid treatment of dissidents.  Remember, these are the same folks who brought us the crackdown of the Tiananmen Square protests back in 1989.

It wasn’t until I read This article. This one. And this one. that I began to grasp just how pervasive, insidious, and invasive the PRC efforts were.  The more I thought about it, the less I was able to sleep.

Yes, I added elite spec-ops, gun drones, firefights, and a high body count on top of it all to make a typical Mil SF action story, but the foundation is a picture of real-world authoritarianism made frighteningly more wicked and effective by advanced technology. This part, tragically, is not made up.

‘Enemy of my Enemy’ is a spec-fiction action piece set in the next century, but perhaps, in some small way, the mention of this real life, present situation can do a little to raise awareness – not only of the Uyghur’s treatment, but of the rise of ubiquitous, invasive monitoring and surveillance, and the corresponding erosion of human rights and dignity.

Because if history is anything to go by, this trend and this technology will only grow and spread. We need to be vigilant and proactive against it in every form.

If you want to do more, take a look at Human Rights Watch. They deal with these kinds of issues and have an excellent rating at Charity Navigator. In fact, I plan on donating a portion of the first 6 months of ‘EomE’ sales to them.

So buy the book. Tell a friend. Or donate direct.

Art hard and have a great day.

A solid Sci Fi show with a gritty story and great effects, but if ‘Altered Carbon’ says anything about the future, it’s that science is really secondary; humanity’s progress is not and never will be linked to technology. The bottom line is we never advance beyond our morality. Period.

In fact push it as far as you want, technology remains just another function of old-fashioned human cruelty, conceit, greed, lust, and rage. Dub, sample, and remix – it’s still the same old song all over again. Hide behind chrome and smart glass and mirror-shades, dress it up in gene-spliced, supermodel customized sexiness with neurachem lethality, package it in alien alloys and complex algorithms, our depravity still shows.

When the end credits rolled on episode 10, I was brought full circle back to 2009 and the fundamental conviction I had when I decided to try and write a SF novel as a Christian: only a spiritual ethic that upholds life as sacred can restrain humanity from becoming inhumane. Lose the preciousness of life and you open the door to contempt and cruelty; commodify people and you end up committing atrocities.

That’s not to say I want my fiction to be sermonizing. No, I aim for entertainment, escapism, and action. Most of my stories have loads of firepower and a high body count. But I want to build the work on a solid foundation. I want substance, themes, meaning in there as well.

Despite the cool visuals, wicked action scenes, and great acting, I was disappointed when Altered Carbon was over. Not that it had ended but at the sordid sameness of it all. It was almost a relief. What was meant to be action-packed cyberpunk coolness and world-weary wisdom was just so uninspired, so sad.

There was a smack upside the head afterwards too: a call to confront the question of faith in spec-fiction once again. To respect the conventions of genre, the demands of the medium, and the expectations of the audience  and aim for quality, and yet somehow portray spiritual realities organically in the plot, characters and fictional world.

Thanks and have a great day.

BTW, that first novel, RUNNING BLACK, and the sequel SHIFT TENSE are available at Amazon. HERE and HERE

The next chapter in the Zombie 6 novella ‘Enemy of my Enemy’ is now available. Click on the title link above or use the pull down menu in the header. Treachery, reversals, foes all around, the team races to confront the real enemy.

In discussing cover art for the upcoming Z6 ‘Enemy of my Enemy’ novella, I mentioned to the graphic artist I had a couple more ideas for the team/setting. Not only did he do an excellent job for ‘EomE’, he worked up a quick Z6 team logo – For when Z6 comes around in the fiction queue again.

Have a great weekend.

From the upcoming Mil-SF novella “Enemy of my Enemy”

I glanced around at my team, the scientists, Bozan and al-Asiri, the wounded… The chill in the air seemed to drop another ten degrees. “Sahito, where are you?”

“On the Hephaestus, Captain Dante. Where else would I be?”

I let out an exasperated sigh. “Fine. Where is the Fleet?”

Approaching the planet’s moon, two-hundred and forty thousand miles away… Sahito gave the answer so casually, at first I thought Zombie Six’s tactical A.I. had just made a joke. The next two seconds were dead silent as I waited for the punch line.

“How long to Fold-Space transition?” I asked. I sensed I wasn’t going to like the answer.

“Four minutes and 27 seconds. The jump engines are spooled up,” the A.I. reported crisply.

My reaction split me quicker than atoms in a tactical nuke: white-hot rage in my head and icy despair in my gut. Zombie Six had not just been reported as dead; we’d been left behind.