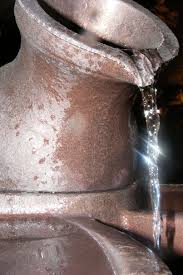 The adoration of men, that is.

16So the three mighty men broke through the camp of the Philistines, and drew water from the well of Bethlehem which was by the gate, and took it and brought it to David. Nevertheless he would not drink it, but poured it out to the LORD; 17and he said, “Be it far from me, O LORD, that I should do this. Shall I drink the blood of the men who went in jeopardy of their lives?” Therefore he would not drink it. 2 Samuel 23:16,17a

Reports of the latest evangelical train-wreck/another minister falling victim to his success evokes several painful thoughts. The first is a wince of recognition. I watched the church I was a part of for 22 years morph into a smaller but no less sordid creature. The second is the sad, all-too-common snare of conceit and ministerial success. Without humility and perspective, it breeds arrogance – an ugly parody of godly authority. “Don’t believe your own press” an older man told me when I took a full-time ministry position. Genuine success has more to do with God honoring His Word, the Death and Resurrection of His Son, and His response to peoples’ needs and faith than any human ability, cunning, or position. Easy to remember when you start – easy to forget after a measure of accomplishment.

I’m not diminishing the reward and recognition of faithful service, nor am I undermining the concept of ministerial authority. My problem isn’t authority – it’s with bad authority. And ministers seem to be doing a fine job of ruining their credibility without me. Even allowing a measure of exaggeration and plain old peevishness in the report, this kind of rampant hubris, duplicity, and gullibility is a kick in the stomach to the testimony of Christ and the public credibility of his people.

Yes, Jesus remains true and faithful above the squalor and squabble. He is the same, yesterday, today and tomorrow. He’s the Savior. But I wonder if He gets tired of all the squandered opportunities.

Jesus saves. He’s the only one you can trust all the way to eternity.

Further reading for those considering full-time ministry. (I’d make it mandatory, if I could.)