Wrote this sample a while back at the request of a company working on a Post-Apoc RPG. Don’t think their project ever took off but I was pleased with this vignette.

Trying to get back home…

A neat little term to make someone at a desk feel better. A word-trick to contain what happens when the reins of civilization slip and life-long neighbors flip psychotic overnight. Hell vomits mind-numbing savagery on some little town or village, like Satan’s timeshare, and we expect a clinical description. It is life ripped out by the roots, a world torn and shattered, bodies draped over charred rubble accenting a certain brutalized emptiness.

Like dabbing antiseptic on a gut wound; the sleight-of-hand won’t stop the bleeding, but maybe it’ll take away the sting.

We were just trying to get to safety. To friendly lines. Back home.

I drew on the stub of my cigarette, embers on the filter, and looked through the binoculars again. The hollow eyes of a hundred broken windows stared back at me. Nothing. No motion. No sound. Not even birds. The town was empty – or at least made to look that way.

I keyed the mike. “I want security 200 meters out on both flanks. No visitors this time.”

“Yep. Probably not,” I sighed. “But we have to look anyway. We’re low on everything. And,” I patted my vest pocket. “I’m out of cigarettes.”

I cradled the mike and pounded on the roof. “Smiley! Crank her up. We’re going in. Keep your eyes peeled for a gas station.” As the Bradley lurched into gear I grabbed the .50, unlocked it and swung it forward. “Knowles. Load up a TOW. I don’t want any surprises.”

“Sure thing Sarge. Last one though.”

“Well then let’s hope we don’t need it.”

The remnants of my company broke out of the tree line and start downhill into another nameless east European town. 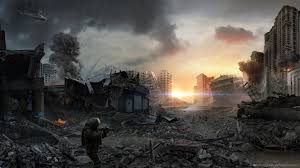 We found two gas stations. Eventually. Both had been raped clean. Whoever it was missed the rental center though. There was a warm dry garage with a lift and tools still scattered across the workbenches. More important there was a 200 gallon diesel tank in a concrete shed out back. Its tin roof had collapsed in the fighting and the scorched frame of a trunk was melted into the asphalt in front of the door. Easy to miss it if you weren’t desperate and didn’t know what to look for.

“Round up everything that even looks like it still works. Bring up the truck and have Dureky’s squad drain this thing. We can fuel up once we get clear of this place. I don’t like being confined.” I jumped down out of the hatch. “Stay here and keep an eye out – I’m going scrounging.”

I kicked in the metal side door and let that rusty dead air and sewage tang billow out. I peered into the gloom of the office area. There’s got to be a break room. Stepping gingerly over the threshold, I started my search. Right away I came across a row of scattered bones shrouded in moldy suits. Lined up in one of the larger offices, all of them were face-down with their skeleton wrists zip tied behind them. Civilian casualties from the early days. Probably the first wave of riots and retaliation. I keep looking.

And there it is: end of the hall next to the bathrooms. Thank Christ the vending machines are still there and one of them has cigarettes. Sobranies, Davidoffs, even Magnas, all dirt cheap Russian smokes but still. I break open the back and start stuffing my cargo pockets.

I feel the explosion through the walls. I freeze. My radio squawks.

“Contact! Contact! I got heavy contact east. Anders is gone. So’s Travino. Michaels is pinned down. It’s Putin Guard! Say again – Putin Guard. I see 3 BMP3s and one, two T80s. I need back up now.” Heavy fire hammers in the back noise.

Shit. Crumpled packs fall from my fingers. I snatch up my M4 and start running to the sound of guns.