I hope you’re safe and well in the midst of what increasingly resembles a plot from a dystopian sci fi novel. Despite this present strangeness, I’m pleased to announce Shattered Worlds Book One, Beneath the Broken Moon is now available.

“Took long enough,” you say. Yes, it did. There’s a story behind that too, but I’ll spare you. It’s done now and the ball is rolling again.

Book Two, Into the Scorned Lands is slated for release later this year, also as an ebook. If sales merit, I’ll combine both in a print version.

In other writing news, the table top war games , Hardwired, the TST Expansion, and Zona Alfa all continue to do well. In fact, the Stalker7 Facebook Group for Zona Alfa has grown to nearly 550 members since its inception in January, 2020. If you’re a miniature painter, table top gamer, or interested in narrative war games, feel free to drop by the Stalker7.com site for more information. If you’re into those things already and the idea of cyberpunk or Russian-flavored post-apocalyptic skirmish wargames appeals to you, request to join the group and mention you saw it here.

Thank you all for your patience and support. More news as it comes.

Another excerpt from Beneath the Broken Moon. Book One of the upcoming post-apocalyptic fantasy, Shattered Worlds, by Patrick Todoroff.

From Part 2 –  Into the Scorned Lands 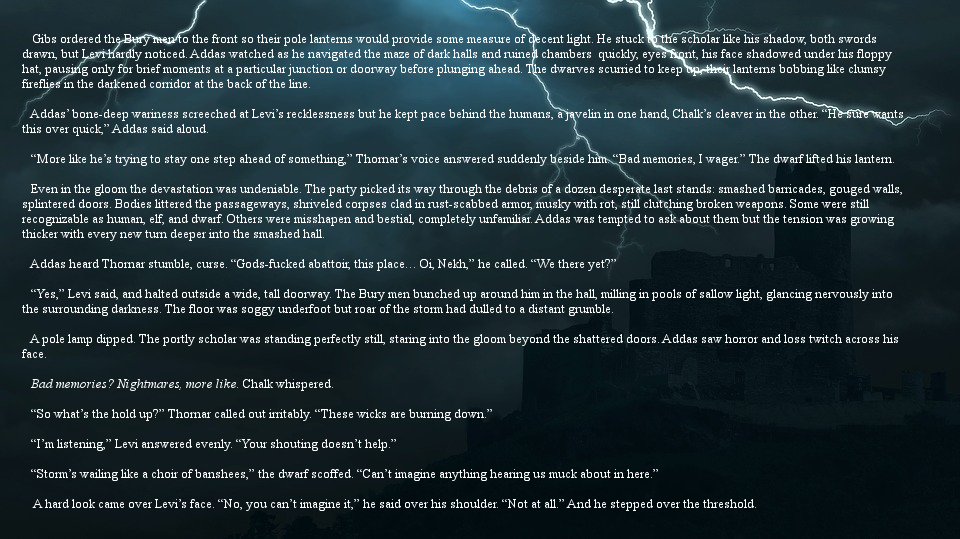 Bit of writing news for the new year.

I’ve decided to alternate fiction projects in 2017. My first and main effort continues to be the post-apocalypse fantasy novel Shattered Worlds,  (currently hammering out Act II, Into the Scorned Lands) while the second, ‘mistress project’, is a straight up military science fiction novella presently titled Zombie 6.

Focused on a spec-ops team ordered to support the embattled Colonial Administration Security forces on the mining colony Mèng Tiān, Zombie 6 will be offered free here on HSSJ as it progresses. I have added a tab to the top header menu. The first three chapters are up already and I plan on posting new ones bi-weekly. I’m getting a kick out of where the story is taking me and I hope you enjoy it as it develops too. Feedback is welcome and comments are always appreciated.

In other fictional realities, the second Eshu International book, Shift Tense is now available in print.  You can pick up a copy here at Amazon. For whatever reason, reviews for the Kindle version have not, are not, (will they ever?) carrying over to the print listing, so would some of you nice folks who have read Shift Tense fire off a few lines or Copy-n-Paste your Kindle review so it doesn’t look so forlorn there? Thank you very much.

Finally, thank you all for your continued support. The older I get the more convinced I am success is defined by creativity, community, and contribution more than anything else. I’m fortunate to have such excellent family, friends, and fans. Thank you and happy new year.

Eresh’s Chimney looked like a mud castle made by a giant. A mish-mash of crude bricks, rough boulders, and hewn beams the thickness of tree trunks, the spire gnarled its way skyward, knobby, crooked, and enormous.

There was a single entrance at the ground level, two massive doors of stone. They were  the color of storm clouds and seemed to take forever to open.

The sun had started its drop toward the western edge of the horizon when Levi, Gibs and Addas watched Snat delicately unwrap a leather bundle of long wire instruments and with a wink, get to work on the mechanism. “Have us in before you can say ‘Ph’nglui mglw’nafh Cthulhu R’lyeh wgah’nagl fhtagn.'”

Twenty minutes later, he was still fussing with it with his tools, but muttering in goblin under his breath.

Levi steeped up behind him and peered down over his shoulder as he worked.  “Legend has it that lock was fashioned by Völundr himself, sort of a payback to Eresh for helping him escape an island where he’d been imprisoned. Cunning genius that he was, I’ve read the smith crafted such things looking in a mirror. That way, spying eyes would be hard pressed to understand, let alone copy the secrets of his trade. Perhaps if you imagined yourself inside the lock—”

“Credentialed in gobermouch before the Shattering, were you?” the goblin snapped. “Cause you’re a bit mouthy to have been a picklock.”

“Ah, it’s just we should gain entrance before the sun sets. While there’s still light, you see.”

“I see.” The goblin gritted his teeth, put one pointed ear against the lock plate. “If you’d quite yammering. I’m—” A grin. A soft click. “There!”  He tugged gently. The massive stone door whispered open.

Snat knelt and wrapped his tools back up. “In you go,” he nodded. “While it’s still light.”

Finished edits on part one of The Shattered Worlds and decided to play around in GIMP.  I like the way this turned out. I think people are going to enjoy this story.

Someone asked about ‘Dead Saints’ the other day. Well, it’s on the back burner until the election is over. It’s been a stop and go project from the beginning, with the first scenes and outline sitting on my computer for several years. The current delay is due in part by my malaise and general frustration as well as an eerie resemblance between the current political situation and several key plot points.

For example, the story’s antagonist is a corrupt politician demonically inspired to boost their career trajectory toward the White House by deliberately allowing a terrorist attack and then playing the hero in the aftermath. Evidence of this conspiracy is contained in emails thought deleted by the politician’s staff but uncovered by the protagonist while battling both natural (terrorist) and supernatural  (demonic) forces in an attempt to stop the imminent terrorist threat.

And here I was, making stuff up.

Have a good weekend.